You can make a difference
Make responsible choices about the environment. Save energy. Inspire others to do the same. It all adds up to a more sustainable campus, a cleaner community and a healthier planet. If you’re ready to do your part...
Join the Movement

We all know taking care of our environment is important. People.Power.Planet helps you take action and create a positive impact on our planet. It shows you real ways to change your behaviors across our campus to save energy, cut waste, and achieve more significant efficiency. It rewards you with points and recognition for doing your part, and lets you have fun challenging others to join you. See who’s really committed to the cause while you help reach our sustainability goals. 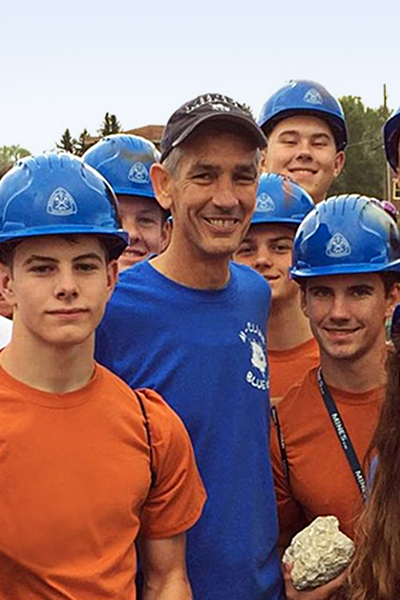 A Message from the President

The Colorado School of Mines takes a multifaceted and committed approach to sustainability, from energy and water conservation in our buildings on campus, to sustainability related student activities and coursework. People.Power.Planet helps bring it all together.

Building with the highest % gas saved

Energy Use vs Baseline

Building with the highest % gas saved

Energy Use vs Baseline

Earth Day 2020 is the 50th anniversary of Earth Day. Mines Sustainability is hosting a virtual Earth Day Fair at https://www.mines.edu/sustainability/earth-day-fair/

April 22, 2020 is the 50th anniversary of Earth Day! Look for online events all month such as this Eco-Careers event April 1-2, 2020 at http://www.nwfecoleaders.org/conference

Due to the change to online courses and students leaving early for spring break, the Dr. Geller presentation is being postponed until the fall.

Energy Efficiency as an Energy Resource

Dr. Howard Geller, Executive Director of the Southwest Energy Efficiency Project, will speak about energy efficiency as an energy resource on March 12th from 12:30 p.m. to 1:30 p.m. in the Green Center, Petroleum Hall. More at https://calendar.mines.edu/event/energy-efficiency-as-an-energy-resource/

Dinner will be provided!

The United States and China have become the two biggest carbon emitters in the world and thus the two largest contributors to climate mutation. But they have quite different perspectives on their social responsibilities in this regard. The U.S. argues that both should commit to reductions and that the U.S. will not reduce if China does not. China argues that the U.S., as the larger per capita and historical emitter, should reduce first. We will explore these and related disagreements and their implications for the exercise of social responsibility in engineering.

Carl Mitcham is an Emeritus Professor of Humanities, Arts, and Social Sciences has been visiting China since 1992 and now teaches regularly during the spring semester at Renmin University of China. He will be suggesting that Chinese engineers may be acting with more social responsibility than American engineers. Dr. Mitcham is one of the most influential philosophers of engineering worldwide.

Join SRSE for an interactive discussion and free dinner!

Sustainability is important to me because I love to be outside, living in Colorado gives me an appreciation for the environment and it’s conservation. I want my children and grandchildren to be able to see the amazing things that I get to, and I want them to be able to breath clean air, have weather that is temperate, and water that is clean. Our earth gives us so many gifts of resources, but we have to use them wisely and thoughtfully always with sustainability in mind. Our resources are not endless and we need to constantly be striving to find new ways to preserve the planet. Being a part of the sustainability efforts here on the campus I love, is an extension of my value of sustainability. I am an educator, and we all can do more to educate ourselves about what’s best for our environment.

Mary is the Director of Residence Life and Housing and member of the Sustainability Committee at Mines.